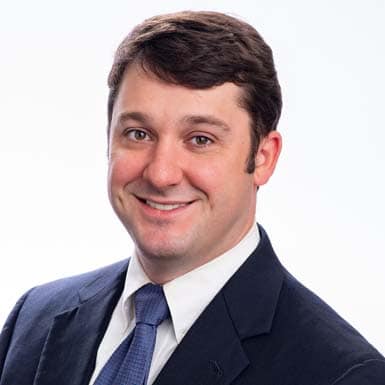 Peyton Bell, an Augusta native, is an associate at Harris Lowry Manton LLP, where he focuses his practice on product liability, wrongful death, personal injury and business torts. A graduate of the University of Georgia Law School, Peyton previously worked for an insurance defense law firm. This gives him a unique advantage when handling claims for injury clients, because he can anticipate how the opposing counsel will build its case. Peyton is an active member of the Georgia Trial Lawyers Association, State Bar of Georgia, and American Association for Justice.

During his time in law school, Peyton served as a legal extern for Western Judicial Circuit Superior Court Judge Lawton E. Stephens and as a research assistant to several professors. Peyton also competed on the Georgia Law mock trial team, was elected President of the University of Georgia’s Graduate Student Association, and was awarded the William King Meadow Award, which is presented to the graduating student who best exemplifies the integrity, sense of responsibility, and high standards of the legal profession and who has the keen sense of humor necessary to afford a proper human perspective to the resolution of legal problems.

Before law school, Peyton served as a Legislative Assistant and Press Secretary for U.S. Congressman John Barrow, who represented a large portion of East and South Georgia. These experiences gave Peyton an in-depth understanding of not only the justice system, but the legislative process which informs it.

When not in the office, Peyton can be found training for his next triathlon, or honing his public speaking skills by taking improv classes at Dad’s Garage Theatre Company in Atlanta. Peyton and his wife, Kate, are members at Second Ponce De Leon Baptist Church, where he serves on the local missions council.

JONES v CSX: After three long years, Richard and Elizabeth Jones, parents of camera assistant Sarah Elizabeth Jones, have come to the end of a long, painful road of both investigation and litigation. Harris Lowry Manton LLP secured an $11.2 million jury verdict in the case of Jones v CSX, a resounding jury confirmation that the 2014 death of the vibrant and talented 27-year-old was the result of the negligence of multiple parties, including CSX Transportation. Sarah was fatally struck by a train while working on the film Midnight Rider. In this complicated case, which began with multiple defendants -- all of whom either settled out of court with the plaintiffs or were dismissed by HLM -- defendant CSX attempted to blame the victim for the tragedy, asserting the film crew should not have been on the tracks in the first place. The company also claimed the train operator could not see people on the tracks, and once he was upon the crew, could not slow down or stop as it would cause the train to derail. After hearing the facts presented by HLM's legal team, the jury sided with the plaintiffs, speaking clearly through their unanimous verdict of $11.2 million, of which CSX is responsible for 35%. HLM Partner Jeff Harris explained, “Richard and Elizabeth Jones’ objectives in filing this lawsuit have been clear and unwavering: To find out what happened on the day of their daughter’s death, determine who was responsible, hold those who made reckless and careless decisions accountable and, finally, ensure this kind of tragedy never happens again on another film set. With this verdict, the last step in our journey together, we have achieved those objectives." When asked their reaction to the verdict, Richard Jones, on behalf of the family said, "We are at peace."
https://www.hlmlawfirm.com/blog/testimonials/11200000-2017/

Simmons v. SouthCoast Medical Group: In March of 2018, Harris Lowry Manton LLP partner Jeffrey R. Harris and associate Yvonne S. Godfrey secured a record-setting $18 million Chatham County jury on behalf of their client, Joan Simmons, who was tragically and catastrophically injured as a result of medical malpractice. Simmons, a 58-year-old woman in Okatie, S.C., was admitted to a Savannah, Ga. hospital on July 20, 2014, with complaints of back pain and signs of an infection. An infectious disease doctor at Southcoast Medical Group failed to diagnose and treat her spinal epidural abscess, a serious complication of the infection. The untreated abscess put pressure on Simmons’ spinal cord, causing paralysis in both legs. As a result of this medical negligence, Simmons was left permanently paraplegic. After hearing the facts presented by the legal team during the seven-day trial, the Chatham County jury returned the largest medical malpractice verdict – and the largest personal injury verdict – in the county’s history. The jury ruled in favor of the plaintiff, finding that Southcoast Medical Group and its physician were liable for failure to diagnose and treat a spinal abscess. The jury apportioned 90 percent of the fault—or $16.2 million—to SouthCoast Medical Group and Dr. Sarah Barbour, an infectious disease specialist. Harris Lowry Manton LLP’s trial attorneys clearly demonstrated the catastrophic effect of medical malpractice, explaining that Joan Simmons walked into the hospital and left in a wheelchair, unable to walk. The legal team worked hard to ensure that justice was served for their client and that responsible parties would be held accountable for their negligence. “The jury in this case recognized that Joan Simmons was tragically, catastrophically injured and that she will be a paraplegic the rest of her life as a result of medical malpractice,” said Harris Lowry Manton LLP partner Jeffrey R. Harris. “The jury’s...
https://www.hlmlawfirm.com/blog/testimonials/18000000-2018-simmons-v-southcoast-medical-group/

Sasser v. Ford Motor Company: On June 15, 2000, Kelsey Sasser, age 6, was riding in the rear center seat of her mother’s 2000 Lincoln LS sedan. The rear seats were equipped with special latches permitting them to fold down to provide extra cargo space and access to the trunk. The car was involved in a frontal collision and Kelsey Sasser’s seat collapsed on her, causing spinal injuries. Kelsey is now paralyzed from the chest down and will require assisted care for the remainder of her life. Harris Lowry Manton LLP worked with Kelsey’s mother to sue the manufacturer of the car, on Kelsey’s behalf, alleging that the seat collapsed as a result of a defective seat back latch. Jeff Harris explained, “Representing children who are catastrophically injured is a great responsibility. We were fighting to make sure that Kelsey would always have access to the highest level of medical care available. Had Ford done what a reasonable manufacturer would have done, this tragedy would never have occurred.” The plaintiffs also sought punitive damages, asserting that Ford knew about design problems with the latch as early as 1993. The company changed the design on its 2001 LS models but failed to recall the 2000 sedan. In this case, HLM secured combined compensatory and punitive damages against Ford totaling $47.7 million.
https://www.hlmlawfirm.com/blog/testimonials/47700000-2004/

Terhune v. Forum Group Corp et al.: Loretta Terhune was awarded $8.5 million in actual damages and $35 million in punitive damages as a result of the poor care her father received during the eight months he was a resident at Moran Lake Road Nursing Home in Rome, Ga. Terhune sued Forum Medical, the company that owned and operated Moran Lake. Her father, Morris Ellison, was malnourished, dehydrated, denied medical care for a broken hip and ultimately died after what was supposed to be a temporary stay as he received post-operative rehabilitative care. He was otherwise in good health. Steve Lowry, lead counsel, explained, “The care provided by this nursing home was horrific. The owner was using health insurance payments to fund his lavish lifestyle while depriving the nurse home residents of basic care. The large punitive damages award should serve as a wakeup call that the citizens of Georgia will not tolerate those who abuse the elderly.” With the help of Harris Lowry Manton, Ms. Terhune’s case brought the largest judgment against a nursing home facility in the history of the State of Georgia.
https://www.hlmlawfirm.com/blog/testimonials/43500000-2010/

Jenkins v. Lambert: On May 10, 2016, a Decatur County Superior Court jury awarded $35 million to Climax, Georgia, Police Chief Joel Jenkins and $5 million to his wife Aimee after he was hit by a pickup truck in 2010. Harris Lowry Manton partner Stephen G. Lowry served as lead counsel for the Jenkins family. The jury found Derrick Steven Lambert liable for Jenkins’ injuries. Lambert was under the influence of Oxycontin and Xanax when he hit Jenkins’ patrol car head-on with his 2005 GMC Sierra pickup truck. Chief Jenkins had pulled to the side of the road in to help a stranded motorist. The lights on his car were flashing. Chief Jenkins is confined to a wheelchair at present because of hip problems caused by the wreck. Jenkins, 42, is permanently disabled and can never work in law enforcement again. Evidence presented to the jury included Lambert’s claim the patrol car lights weren’t flashing and his explanation that he didn’t see the car; he did not attempt to brake; and 11 days before trial he was charged with DUI. Lambert’s legal defense was to blame Jenkins and the stranded motorist for the wreck. “Chief Jenkins was hurt for doing his job the way he was supposed to,” Steve said. “It was an honor to help Joel and Aimee after his tragedy.” Though Lambert was under the influence, his lawyers pointed to the victim for causing his own injuries. They claimed circumstances did not warrant Jenkins parking partially to the side of the road facing south in a northbound traffic lane. Lambert also blamed the stranded motorist, claiming the man had a suspended license and knew he had a faulty gas gauge when he ran out of gas. Lambert’s attorneys also fought against damages, saying Jenkins’ hip injuries were caused...
https://www.hlmlawfirm.com/blog/testimonials/40000000-2016/
5
5
Harris Lowry Manton LLP
Scroll To Top
Text Us404-998-8847