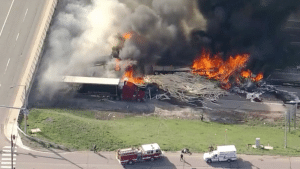 On Friday, April 26, four tractor-trailers and 24 passenger cars were involved in a collision on I-70 in Lakewood, Colorado. The multi-vehicle collision left six injured, including a fire fighter, four people dead, and caused damage to the road and to the Denver West Parkway bridge.

At this time, the crash is still being investigated, but the truck driver – Rogel Lazaro Aguilera-Mederos – is facing four counts of vehicular homicide. There is no evidence that the driver was under the influence of drugs or alcohol.

The driver “closed his eyes in fear”

According to WHNT19, Aguilera-Mederos told investigators he was traveling at 85 mph when his brakes failed, leaving him unable to stop the truck from slamming into the traffic jam ahead of him on I-70. He said he wanted to pull the semi over, but there was already another truck in the shoulder. Convinced he was going to die, Aguilera-Mederos claimed that he “closed his eyes” at the moment before impact.

How true this account is, we cannot tell; “A witness told police that prior to the crash, he noticed something was wrong when he saw Aguilera-Mederos ‘wide-eyed’ and ‘with a terrified look on his face,’ the affidavit states.”

News reports have not pinpointed the exact start of the fire, but Aguilera-Mederos was hauling lumber, and diesel fuel spilled out onto the road, per NPR. The fire reportedly burned at 2500 degrees Fahrenheit – hot enough to melt aluminum, and hot enough to decompose concrete. ABC News reports that Colorado Department of Transportation Chief Engineer Joshua Laipply inspected the overpass and found is structurally safe, though repairs will need to be done.

The road repairs took days to finish, though the westbound side if I-70 opened before the eastbound side, where the crash occurred, did.

A Good Samaritan to the rescue

As awful as this crash was, and are tragic as the loss of lives is, there is one silver lining – Darin Barton. Mr. Barton had been panhandling near the intersection when the truck crash occurred. According to KDVR, Mr. Barton saved people’s lives that day. He told the news “As soon as [the truck] rolled over, it just caught on fire. And I just dropped my sign, took off running. As soon as I [saw] flames, I headed under the bridge, grabbed three or four people out of a couple cars.”

Per Mr. Barton’s account, there were “other Good Samaritans: working alongside him, to help pull people to safety.

Friday’s multi-truck crash could be one of the worst in Denver’s history. We are keeping the families of the injured and the deceased in our hearts today, and we hope they find some closure.

Harris Lowry Manton LLP handles complex truck accidents claims. To schedule a free consultation with a member of our team, please call us in Atlanta at 404-998-8847, in Savannah at 912-417-3774, or fill out our contact form.