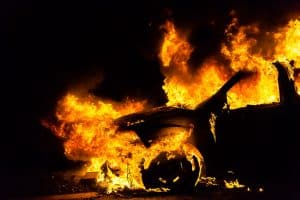 Car and Driver reports that BMW is recalling more than a million vehicles because of the potential for electrical fires. There are two different problems, leading to two different recalls:

Both defective parts were initially reported in 2007, but BMW decided they were not significant enough threats to warrant a recall before now. So far, no statement has been forthcoming as to whether or not the recalled cars can be linked to an investigation by ABC News in May, regarding parked BMW vehicles that spontaneously combusted.

Which models are being recalled?

All of the cars being recalled for the defective valve heater are gasoline non-turbocharged six-cylinder cars, years 2007–2011. The models are:

The recall also includes the 128i, years 2008­–2011. The recall includes vehicles of all variants, per Car and Driver: “rear- and all-wheel-drive powertrains in coupe, convertible, and station-wagon models.”

Replacement parts are scheduled to be available in December. If you drive one of the affected cars, you can take your vehicle to your BMW dealership for a full replacement at no cost to you. If you are unsure whether your car might be affected, you can enter your VIN here, and it will tell you if your vehicle is being recalled. This service, care of the National Highway Traffic Safety Administration, is free and available to all car and truck owners.

While there have been no reported injuries associated with the BMW recall yet – ABC News reports “A spokesman for the German automaker says the risk of fire is very low in both cases, but the vehicles should stay outside ‘in an abundance of caution’” – drivers and passengers should still be aware of the dangers, especially if they park their cars in a garage. A vehicle fire can swiftly lead to a house fire, leading not only to significant property losses, but also to severe burn injuries. Victims and their families may be entitled to compensation for these injuries and property damage.

According to Car and Driver, “BMW said it first discovered the issue in 2007 and changed the pin coating from tin to silver on the production line starting in May 2011. However, it has not issued a formal recall until now, despite multiple reports of ‘heat-related damage’ and owner complaints to NHTSA.”

Harris Lowry Manton LLP handles complex defective product claims for clients throughout Georgia. Our team of attorneys is equipped to uphold your rights if you sustain a catastrophic injury or severe burn because of someone else’s negligence. To learn more, or to schedule a free consultation, please call our office in Atlanta at 404-961-7650, in Savannah at 912-651-9967, or fill out our contact form.