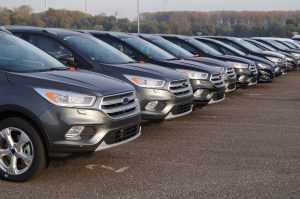 Between 2010 and 2016, Ford produced two vehicles – the Focus and the Fiesta – with a dual-clutch transmission. They were supposed to be low-cost and fuel efficient. Instead, they put drivers’ lives at risk, as the cars would “randomly lose power on freeways” and “unexpectedly bolt[ed] into intersections,” per an in-depth investigation by the Detroit Free Press.

Ford spent five years trying to find a way to fix the problem, but in doing so, “[t]he automaker pushed past company lawyers’ early safety questions and a veteran development engineer’s warning that the cars weren’t roadworthy, internal emails and documents show. Ford then declined, after the depth of the problem was obvious, to make an expensive change in the transmission technology.”

In short: Ford knew they were producing cars with defective transmissions, and they sold them to an unsuspecting public anyway. The Detroit Free Press found more than 4,300 consumer complaints about the transmissions, and as many as 50 “previously unreported injuries” associated with the vehicles. At this time, there are still at least 1.5 million dangerous and defective Focuses and Fiestas on the road, and there is still no fix available.

Why did these cars make it onto the road?

These dangerous cars made it onto the road because Ford put profits ahead of people. The production was rushed for these vehicles because America was just coming out of the recession at this time. Consumers were buying new cars again, and Ford wanted to make as much money as it could. Per the Detroit Free Press:

“A high-level, confidential analysis by Ford in 2012 acknowledged rushing the cars to production, taking shortcuts to save money and apparently compromising quality protocols instituted with fanfare by then-CEO Alan Mulally. That review, obtained by the Free Press, also said the transmissions would be phased out and a different technology used going forward, but that didn’t happen.”

Internal documents showed that even 6 months before the vehicles rolled off the line and into dealerships, engineers at Ford were warning of potential problems with the transmission.

Yet when the website Jalopnik ran a story about the defective DPS6 transmission, Ford official T.R. Reid responded “We believe we brought a good product to market. We worked through some challenges in development, some issues developed subsequently, and we think we addressed them responsibly. These vehicles that are still on the road are safe….”

“We believe we brought a good product to market.”

Over the past 8 years, both cars have been subject to numerous recalls – the Free Press cites 18 – unrelated to their transmissions. Ford’s own engineers warned of the dangers. There is an internal document stating the “team has evidence that this event is customer safety critical and should be rated as an SEV 10 event losing power entirely.” “SEV 10” stands for “severity 10” – the most serious warning about potential safety risks.

A car going 70 mph can slip in neutral with no warning at all – a problem Ford knew about and did NOTHING to fix – and the spokesperson’s response is, “We believe we brought a good product to market”?

Ford has a history of putting dangerous cars on the market

The original high-profile defective auto lawsuit involved the Ford Pinto, which could explode in a car crash because of the placement of the gas tank. We would like to think that Ford has learned its lesson since then, but we know firsthand it has not. Harris Lowry Manton LLP has represented many clients in cases against Ford, and has secured some of the largest verdicts and settlements on record as a result, such as:

One time is an unforgiveable mistake. Three times is a pattern of reckless behavior that has spanned decades because Ford would rather make money than keep its consumers safe.

I’ve Been Injured by a Recalled Product. What are My Options?


If you drive a Ford Focus or a Ford Fiesta that has had repeated transmissions problems, you are not alone. If you have sustained an injury because your car slipped into neutral while you were driving or you were unable to control the car because of constant “shuddering, slipping, bucking, jerking, hesitation while changing gears, premature internal wear, delays in downshifting and, in some cases, sudden or delayed acceleration,” you may be entitled to compensation for your losses. The Georgia auto product liability lawyers at Harris Lowry Manton LLP have taken on Ford Motor Company before – and won.