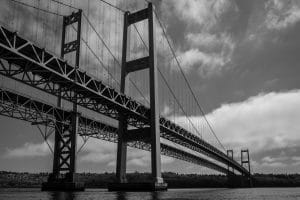 Some of the most tragic and terrifying catastrophes in the United States involved building and structural collapses. When engineering goes wrong, whether through negligence or improper design, lives can be lost and destruction can be immeasurable. From bridges to skyscrapers to apartment buildings, when a construction company or engineer takes shortcuts or fails to perform their job properly, collapses can happen in the blink of an eye.

Here are a few of the worst and most destructive structural failures in history, courtesy of Business Insider.

Now a classic study in bad engineering, the Tacoma Narrows Bridge collapsed less than six months after its opening in 1940. The bridge earned its nickname “Galloping Gertie” when it buckled and twisted even in moderate winds. Use of inexpensive and short plate girders were ultimately to blame, and 40 mph winds eventually caused its ultimate collapse.

Built in 1974, Kemper Arena was known for its innovative and seamless design, even netting its architect an award. The arena featured a flat roof with a temporary reservoir to reduce stormwater runoff. However, local building codes required at least sixteen storm drains, while the arena design featured only eight. The roof was unable to hold more than two inches of rain without overflowing, and when a 1979 storm dumped more than four inches on Kansas City, the roof collapsed. Although the arena was empty at the time, the collapse was so violent it blew out some of the arena walls.

The curved glass buildings Rafael Viñoly designed in both London and Las Vegas had the unintended effect of acting as a magnifying glass. Sunlight reflected on the streets below, reaching temperatures over “160 degrees Fahrenheit, famously melting a man’s Jaguar, and getting so hot that journalists were able to fry an egg on the sidewalk.” The London building also created a wind tunnel so strong, it knocked over pedestrians, trolleys, and street signs.

In 1981, 114 people were killed and another 200 injured when an elevated walkway collapsed at the Hyatt Regency Hotel in Missouri. The fourth-floor walkway collapsed onto another walkway two floors down, crashing into the lounge below. This structural failure occurred in the design process due to the way the walkways were anchored together one below the other, adding “immense and undue stress.” Local police noted it was one of the worst disasters they had ever seen.

Although the Hancock Tower did not complete construction until 1976, this issue began in 1973. The Tower, the tallest building in Boston and now called 200 Clarendon Street, became a safety hazard before it even opened. During construction, engineers found the building was expanding and contracting due to temperature fluctuations, causing the building’s reflective glass to start popping out and falling on the street below. Builders had to replace 10,344 window panes while the area was blocked off to pedestrians to prevent injury.

Other notable structural failures and collapses include:

While under construction in 2019, the Hard Rock Hotel suddenly collapsed, killing three workers and injuring dozens of others. Many victims alleged unsafe conditions and building practices.

Over 50 vehicles plunged into the Mississippi River and 13 people lost their lives when a bridge collapsed in 2007. Investigators later found a design flaw was to blame, exacerbated by workers adding concrete and weakening an already-failing area of the bridge.

In one of Florida’s and the nation’s worst recent disasters, the Surfside condo complex partially collapsed in June 2021. Nighty-eight people died and 11 others were injured. Although the collapse is still under investigation, experts point to degradation of structural support in the building’s parking garage as a possible culprit. Inspectors had reported corrosion and damage as far back as 2018.

What kinds of injuries happen in building and structural collapses?

With these types of large-scale events, injuries tend to be severe and catastrophic. Survivors of building and bridge collapses often experience life-altering physical trauma, including:

There may be a variety of liable parties after a structural collapse, and we can work to determine who should be held accountable. These parties can include architects, engineers, construction companies, building inspectors, condo boards, property managers, and materials manufacturers. We can help you get to the bottom of who is responsible for your injuries and losses and can guide you through the legal process.

The experienced attorneys at Harris Lowry Manton LLP work to secure the financial compensation to which you are entitled for your accident and suffering – we understand the difficulties and complexities of these types of cases and are ready to advocate for you.