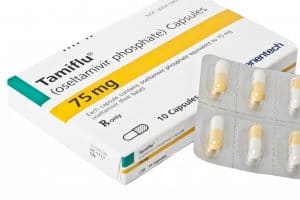 In the late 1990s, Tamiflu was touted as the medication that could save your life if you were infected with avian influenza. The drug flew off shelves so quickly that it became hard to get. Since then, Tamiflu has been marketed as the essential drug for managing major flu strains we deal with annually.

Recently, Hoffmann-La Roche, the manufacturer of the drug, has put out claims that Tamiflu can reduce the contagiousness of influenza and prevent people from contracting it. This prompted a whistleblower lawsuit alleging that Hoffmann-La Roche bilked the U.S. government out of $1.4 billion for its false claims that the drug could stop the spread of the flu.

The lawsuit claims Hoffmann-La Roche manipulated data and the CDC

Studies show that the real story behind Tamiflu’s efficacy appears to be that it reduces the length of time you’ll suffer with symptoms by about half a day, but you’ll still be perfectly capable of spreading the flu. In essence, this could make you more likely to spread the virus because you’ll feel asymptomatic.

It seems that Hoffmann-La Roche misrepresented data to the federal government in addition to the public that prompted a purchase of millions of doses. National ad campaigns were published in medical journals with the intent of planting the false belief that Tamiflu is basically a miracle drug that can stamp out the flu. This strategy worked because Hoffmann-La Roche became the supplier of the drug to the National Stockpile.

A qui tam lawsuit was filed under the False Claims Act, which allows for a penalty of three times what the federal government paid out, putting Hoffmann-La Roche on the hook to repay $4.2 billion plus fees and fines for their fraudulent efforts. Dr. Jefferson, the whistleblower, could stand to earn a minimum of $630 million for reporting the fraud and bringing the lawsuit if payment in full is collected from Hoffmann-La Roche.

Can Tamiflu cause dangerous side effects?

People take prescription drugs because they’re led to believe the benefits far exceed the potential side effects. One of the hard truths people often learn about these drugs is that they would have been better off without them had drug manufacturers just been honest rather than greedy.

In the case of Tamiflu, where the company misrepresented its ability to prevent those infected from passing the flu around, it made the decision to take the drug much easier. Those who took the drug may now experience a host of side effects they could have chosen to avoid had they known Tamiflu would not work as indicated. It’s possible that someone who took Tamiflu under false pretenses and has become injured as a result could make a claim for pharmaceutical product liability against the drug manufacturer.

Children and young adults are the more likely victims of the most severe symptoms, including neuropsychiatric symptoms, such as:

In 2018, an Indiana teenager committed suicide, and a six-year old child in Texas attempted to jump out of a window; both were taking Tamiflu. Research on the drug has shown the most susceptible group to experience such severe reactions are males under the age of 20.

Whistleblowers take heroic steps that are necessary to keep us safe. Without them, companies would be free to commit fraud against the government hindering its ability to protect citizens. At Harris Lowry Manton LLP, our knowledgeable qui tam attorneys understand the seriousness of what’s at stake, and we aggressively pursue justice with the future of the whistleblower in mind.

If you believe you need to bring a claim for fraud against the government and don’t know where to begin, schedule your free case evaluation by calling our Savannah office at 912-417-3774, our Atlanta office at 404-998-8847, or reach out to us through our contact page to tell us your story.