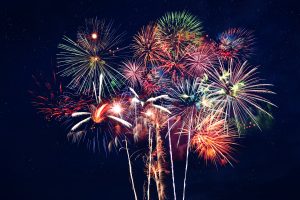 When the Founding Fathers wrote the Declaration of Independence, John Adams said, “It will be celebrated with pomp and parade, bonfires and illuminations from one end of this continent to the other.” With the re-opening of the country in the wake of the COVID-19 pandemic, there will be fireworks celebrations across Georgia and the rest of the country, reminding us that we are one nation.

The celebrations must, however, be conducted according to proper safety standards. Many of the large fireworks displays are conducted by local counties and municipalities. The local police and fire departments often run these larger displays.

Many private fireworks are ignited, too – often without considering how dangerous fireworks can be. Too often fireworks cause death, burn injuries, and other serious injuries. According to the US Consumer Product Safety Commission, in 2019:

There are many precautions that public and private users of fireworks should take. Failure to follow these precautions can potentially result in a negligence lawsuit. Victims of fireworks injuries have the right to seek damages from the irresponsible parties for:

SafeWise suggests that the people and entities who are using fireworks consider the following safety factors:

Consumer-grade fireworks should be properly labeled. The larger fireworks that the police and fire departments use are handled differently.

In Georgia, some fireworks are legal and some are not. You must be at least 18 to buy fireworks.

You should leave firework usage to the professionals. The best fireworks displays are the ones that local governmental units and agencies organize. Professionals are trained to use the safety protocols.

You should never ignite or use any fireworks if you are not sober. Inebriation slows down your reaction time and your coordination. Drinking and fireworks are a very dangerous mix.

At Harris Lowry Manton LLP, our dedicated, compassionate personal injury lawyers fight aggressively to hold fireworks users and manufacturers liable for the deaths and injuries they cause. We demand compensation for all your economic and non-economic injuries. We have extensive experience with burn injury cases and settled one case involving multiple burn fatalities for $21,000,000. We also settled a burn injury case caused by a commercial vehicle accident for $2,500,000.

To speak with an experienced negligence and product liability lawyer, call our Atlanta office at 404-998-8847, our Savannah office at 912-417-3774, or fill out our contact page to share your experience.