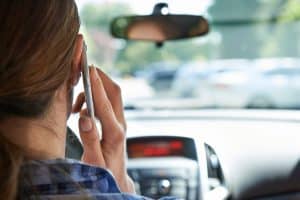 On July 1, 2018, the Hands Free Georgia Act officially went into effect across the Peach State. Under this new law, drivers are no longer permitted to have a cell phone or electronic device in-hand or touching any part of their body when operating a motor vehicle. Under the Act, drivers are still permitted to use a speakerphone, ear piece, headset, or Bluetooth when driving a vehicle, provided the device is not in-hand or contacting the body in any manner.

The new Georgia law has required many people to change the habits they have developed while driving over a number of years. As the Director of the Governor’s Office of Highway Safety Communication, Robert Hydrick, explains, “It’s become a habit we don’t think twice about since we have been talking on our phones while driving for more than three decades, and it is going to take time for all of us to stop automatically reaching for the phone when it rings.”

Representative John Carson (R-Marietta) helped sponsor the bill. He believes that car accidents are being avoided and lives saved due to the publicity surrounding the new law.

Dos and don’ts of the law

Under the Act, drivers are permitted to use voice-to-text features and GPS, per AJC.com. They may also receive and make phone calls hands-free. Drivers can use Bluetooth pieces and single ear headphones to perform these activities. An earbud with a mic can take the place of a Bluetooth-capable car or device, if necessary. The new law also allows the use of in-car communication, navigation, and entertainment systems.

Drivers are also banned from answering emails and other messaging queries, as well as recording or watching videos while driving. If you are legally parked, yet still behind the wheel, you are permitted to perform these activities. However, the definition of “legally parked” does not include sitting in traffic or waiting for a light to change. It should also be noted that emergency and utility workers as well as law enforcement personnel are still permitted to use their phones under the law.

All drivers should consider using the Do Not Disturb feature on their cell phones while driving. This feature, which activates when the phone is in motion, relays an automatic message to the person contacting the recipient that he or she driving and will respond back later.

Enforcement of the law

In describing potential enforcement of the law, Georgia State Patrol Capt. Mark Perry told AJC.com, “While we intend to issue a great number of written warnings and have a lot of conversations on the benefits of going hands-free, each particular interaction is being left up to the discretion of the trooper.”

Penalties for violating the law include:

If you have suffered a serious injury in a car accident due to the distracted driving of another party, our experienced Atlanta and Savannah car accident attorneys are here to fight for the financial recovery you deserve throughout Georgia. Let’s discuss your available options together. To set up a free consultation, send us a message through our contact form, or call us at one of our convenient office locations – 404-961-7650 in Atlanta or 912-651-9967 in Savannah.