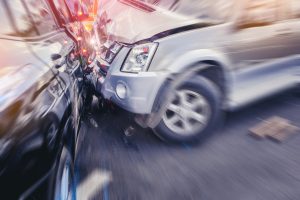 The majority of car crashes in the country involve only a single vehicle. When those crashes are fatal, determining the ultimate cause of the wreck can be difficult. When two vehicles are involved, the situation becomes much more complex; even with video evidence, there are now at least two versions of events and many more interpretations of cause. In multi-vehicle crashes, determining the exact sequence of events becomes exponentially more complicated.

Multi-vehicle accidents are less common than other types of crashes, but the rate of serious injury and death is disproportionately higher in these accidents. According to the Georgia Department of Transportation’s (GDOT) Crash Portal, there were some 1,947,994 crashes on our highways between 2016 and 2020. The vast majority involved one or two vehicles (18% and 75% respectively), while three vehicle crashes accounted for 5% of the total.

Single vehicle accidents are singularly fatal; for every 100 collisions there is about one death (1.1%). Oddly, two vehicle crashes offer much better odds, a dip that continues until five or more vehicles are involved. At that threshold, the risk of death is nearly twice as high (2.1%) as a single vehicle accident. All things being equal, we should expect the risk to double again as we double the number of vehicles. In fact, the risk of death increases seven times to nearly 14.1%; worryingly, the increase in risk holds true regardless of vehicle type or age.

Why are multi-vehicle accidents more dangerous?

The complexities of multi-vehicle crashes create problems that go beyond the how and the why; the more vehicles involved, the more dangerous the crash becomes to victims. Multiple impacts from different angles and the relative speeds of the vehicles involved combine to create a perfect storm that can render crash protection systems virtually useless. Fatalities and catastrophic injuries are disproportionately more likely in these types of crashes.

The simple fact is that, despite new technologies, safer vehicles, and enhanced traffic control systems, each of the improvements and technologies that protect occupants in a crash are designed to work exactly one time. Airbags only deploy once, crumple zones only crumple once, and when they do, the safety system has done its job. However, the vehicle’s structure may be fundamentally altered after a single impact. With multiple impacts from various angles in rapid succession, no safety system in the world stands a chance of fully protecting occupants.

A quick note about “crumple zones”

First and foremost, crumple zones are designed to absorb impact so that your body does not. The idea is that the vehicle deforms in a predictable way to preserve the integrity of the cabin. In the worst cases, crumple zones leave a vehicle looking like a mangled ball of metal with the (hopefully) perfectly preserved cabin in the center. These accidents are of the type featured in commercials with bystanders wondrously exclaiming “They lived.”

There is an important caveat here though; crumpling metal around a vehicle cabin in serious crashes can require first responders to cut through layers of metal to extract occupants. This type of crash is referred to as entrapment. Entrapment is desirable in certain circumstances, but in multi-vehicle crashes, entrapment can have disastrous consequences. While victims are likely to survive the initial crash, they are unable to escape the vehicle and consequently suffer the full impact of each successive crash.

The real consequences of multi-vehicle crashes

A crash in early September in Savannah underscores the severity of multi-car crashes. On September 1, a distracted driver traveling on I-16 struck a van, which in turn struck a pickup truck. This seemingly common occurrence had an uncommonly high incidence of injury. From NBC member station WSAV:

According to the Savannah Professional Firefighters Association, “multiple entrapments” were involved. Savannah crews, with the help of Pooler Fire, reportedly extricated three victims. The van’s seven occupants and the car driver — who was the only person in their vehicle — were taken to Memorial Health for treatment.

GSP says the car driver, who has not been identified, was cited for an expired tag, following too closely and distracted driving. WSAV is told additional charges are pending.

This crash was relatively unique in that the proximate cause of the accident was readily identifiable. Generally, the cause of major pileups is less clear, though the effects of these chain reaction crashes are plain to see. Some residents might recall the 2002 pileup on the Georgia-Tennessee line, which involved upwards of 120 vehicles and resulted in multiple deaths and dozens of injuries.

The Georgia Department of Public Safety’s Specialized Collision Reconstruction Team spent nearly a year investigating that incident. According to the Rome News-Tribune, the agency ultimately determined that a weather anomaly created a thick bank of fog that became the “most significant factor in the GSP crash investigation.” Additionally, it was found that “The pile-up was actually a chain reaction of two wrecks, which occurred first in the northbound lanes, followed by two lesser accidents in the southbound lanes.”

One can imagine the confusion and chaos that follows a pileup of this size; in addition to the severe nature of the injuries suffered, first responders must bring order from chaos. In events of this magnitude, such an effort is akin to battlefield triage. Paramedics and firefighters must first locate victims while establishing a triage plan. Even getting equipment in the right place can take time, potentially exacerbating the already catastrophic injuries of victims.

Multi-vehicle collisions are special cases that require specialized knowledge to understand. The chain of incidents is often unclear, survivors each have their own version of events, and determining who is responsible for what requires thorough investigation. The characteristics of multi-vehicle accidents are unique to each crash, and recovering damages can be a daunting task for even the most experienced attorneys.

When you or your loved one is injured or, worse, killed in crash, time is the enemy. Getting to the facts early can make or break a case. The Atlanta and Savannah car accident lawyers at Harris Lowry Manton LLP have obtained significant settlements and verdicts with thorough factual reviews and early intervention investigations. When you need help, our attorneys have the experience you can rely on. To discuss your case with one of our compassionate attorneys, you can contact us to schedule a free, confidential appointment or call our Atlanta office at 404-998-8847 or our Savannah office at 912-417-3774.