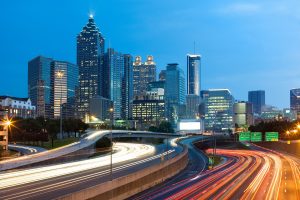 Meandering around on Georgia’s roads can be a dangerous activity no matter where you are. Getting from point A to point B can be a frustrating experience, from road congestion to construction that seemingly never ends. Traffic jams around Atlanta and Savannah are just a way of life that citizens accept as a trade-off to work and live there. Any highly populated metropolitan area sees this problem on a daily basis.

A safety study was conducted on roads around the state, and while the findings of which roads pose the most risk may not be a shock, the number of deaths from auto accidents is eye-opening. Nearly one quarter of the 57 deadliest roads in the study are in the Atlanta-metro area. By comparison, the next worst city is Decatur, home to 12 percent of the roads that made the list.

Take a look at some of the statistics across the state:

Atlanta is typically included on the list of top 10 cities in the Peach State with the most fatal crashes, but it’s not the only area of concern.

The most deaths per mile driven occurred on these roadways across the state:

Accidents on Old National Highway and I-20 around Atlanta are no longer a surprise. Drivers who use these roadways regularly expect to encounter collisions such as:

What causes most of Georgia’s car wrecks?

There are many ways that auto accidents can happen, but certain causes are much more prevalent, including.

At the root of every one of these incidents is negligence.

It’s impractical to try to avoid every dangerous road in the hope that you’ll protect yourself from other drivers. If you are injured in a car accident because someone else was driving recklessly, you need a legal team on your side that can investigate and prove fault to reach a fair settlement. The experienced Georgia car crash attorneys at Harris Lowry Manton LLP will guide you through the complex personal injury claim process to help reimburse you for out of pocket costs and your pain and suffering.

To schedule your free case evaluation with a member of our experienced legal team, call our Atlanta office at 404-998-8847, call our Savannah office at 912-417-3774, or reach out to us through our contact page to share your story.