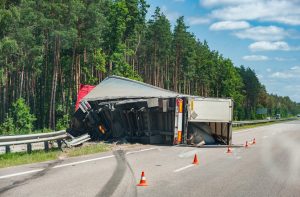 Tractor-trailers and commercial vehicles are constant companions when you travel in Georgia, and Atlanta sees its fair share of truck wrecks and multi-vehicle crashes. On April 1st, there were three completely unrelated tractor-trailer wrecks, all of which occurred before lunch time:

The first truck crash left debris scattered on the road. The second involved an overturned truck. The third involved a jackknifed tractor-trailer. Generally speaking, they have only one thing in common: they occurred on largely empty highways. The videos and photos of the scenes, printed by the Atlanta Journal-Constitution, show very few cars on the interstates with these trucks.

Atlanta is in Fulton County, which is officially under a “shelter-in-place” order. The order requires that people stay in their homes as often as possible, and violators “could face fines of up to $1,000 and/or up to 12 months in jail per offense,” reports WSB-TV Atlanta.

Even though there will be fewer vehicles on the roads, that does not mean the roads will be much safer. In fact, the number of trucks traveling through Georgia’s interstates are likely to increase, as more and more people turn to online shopping and delivery services for their needs.

To meet this demand, the Federal Motor Carrier Safety Administration (FMCSA) has relaxed its hours-of-service (HOS) regulations for commercial vehicles through April 12th. This rule suspension allows divers to stay on the roads longer, and that can be dangerous for a number of reasons.

First, the longer a trucker is behind the wheel, the greater the chance he/she will be distracted by a cellphone, the GPS, activity going on outside the truck, or any number of things. With fewer cars on the road, truckers may be tempted to pay less attention, assuming their risks of getting into a crash are reduced.

Second, truckers are susceptible to “highway hypnosis,” a condition where “the driver operates the vehicle in a dulled, drowsy, trance-like state.” During this time, the driver’s brain activity slows down, which affect his/her reaction time. As an ABC News report explains, “Going into this autopilot-like mode often happens on long, mundane highway drives with few turns or traffic signals, Meehan said. The driver usually can’t recognize highway hypnosis until his environment is somehow jostled — another car cuts him off or he hits a bump.”

Third, because of the volume of good which need to be shipped – and a well-documented trucker shortage – there may be greater numbers of younger, inexperienced truck drivers behind the wheel. Put these drivers in unfamiliar territories, and they could be ill-equipped to handle emergencies as they arise.

Finally, and perhaps most importantly, driving is exhausting. The number of fatigued drivers driving 18-wheelers or box trucks is likely to increase, as companies and suppliers push their drivers to keep going. Fatigued drivers can be just as dangerous as drunk drivers, and there is every possibility that their numbers will increase over the next several weeks.

What can I do if I am in an accident involving a commercial truck?

Truck accidents can lead to serious injuries. If you are hit by a distracted or fatigued driver, you should contact an attorney as soon as you can. Depending on the circumstances of the collision, there could be multiple liable parties, and getting those parties to compensate you fairly for the losses you have sustained can be challenge. You want a team who has experience with these types of cases.

Harris Lowry Manton has secured millions of dollars on behalf of truck wreck victims. We work with accident reconstructionists and medical experts to ensure that you are justly compensated, and to ensure that the trucking companies put safety first. To learn more about our services, please call us in Savannah at 912-651-9967, in Atlanta at 404-961-7650, or fill out our contact form.