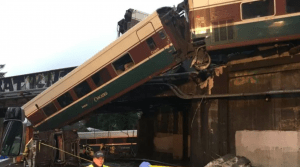 An Amtrak train traveling from Portland, Oregon to Seattle, Washington has derailed. According to the latest developments from CNN, several fatalities have been reported, and multiple people have been injured. The cars from the train spilled over the tracks and onto I-5 below it. Reports claim that both a car and a semi-truck were crushed by the falling train cars. Thankfully, no fatalities have been reported for the drivers of those vehicles.

The investigation into why the 501 train derailed will likely take a long time, as engineers, law enforcement and various government entities look into the event. FOX News reported that the train may have hit a truck. Another passenger, Chris Karnes, told MSNBC that “The southbound train had just passed the city of Dupont and was traveling about 70 mph. ‘At a certain point the train started to wobble a little bit and the next thing that we knew we were down in a ditch. The train had crumpled.’”

Harris Lowry Manton LLP has experience handling complex train accidents and derailments, having secured a substantial $11.2 million verdict on behalf of the family of Sarah Elizabeth Jones, who was fatally hit by a CSX train. We understand what kind of nightmare the family and loved ones of the 83 people on board (78 passengers, and five members of the crew) are facing. We also know that, based on our own experience and what we have seen with derailments in the past, the victims and their families have a long, painful trip ahead of them when it comes to getting to the truth.

In 2017, there were 891 derailments. When a train derails, its wheels leave the rails themselves. In some cases, it may slide off the tracks altogether. When the train leaves the track entirely, it poses the greatest risk for passengers, crew members, and structures, vehicles and people in the immediate area, because the train can slide or tip over.

The most common causes of train derailments include:

Why the Washington Amtrak derailment so terrible

As of right now, CNN reports about 77 people have been transported to the hospital, four with serious injuries. What made this derailment so dangerous is that the train left the track while on an overpass, and the train cars fell over the side and onto the highway below. Mr. Karnes, the passenger who spoke to MSNBC, said about seven cars left the tracks. Furthermore, it appears the emergency doors were not functioning properly, leaving passengers to kick out the windows to get free.

The 501 was traveling on a new route, called the Point Defiance Bypass Project. It was a part of the Cascades High-Speed Rail Capital Program, and $800 million project “aimed at adding more frequent, more reliable and faster service between Seattle and Portland.” The train was traveling at speeds of around 80 mph when it derailed.

What does it take to make a claim against a company like Amtrak?

Because we don’t yet know the cause of the derailment, it is impossible to determine who is liable. However, there are a few potential options that the victims and their families may have:

The families will need skilled, capable attorneys on their side. As a firm which handles these types of claims, we know how challenging they can be. It could take years before the cases make it to court and justice is served. When we filed our lawsuit against CSX on behalf of Sarah Jones, we investigated the scene, poured through thousands of pages of documentation – contracts, depositions, findings from accident reconstructionists, and police reports, to name but some – and worked closely with local and federal agencies. It was a fight from the start, but in the end, justice was served for Sarah’s family.

HLM understands what the victims face in the future. For now, our thoughts are with the victims and their families. We hope they get the help they need, and wish them a speedy recovery.

Harris Lowry Manton LLP handles complex cases involving train derailments and collisions in Georgia and throughout the country. If you have questions about our services, please call our Atlanta team at 404-961-7650, our Savannah team at 912-651-9967, or fill out our contact form to learn more.