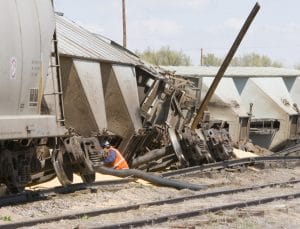 On November 17, 2018, more than two dozen CSX railroad cars derailed in Byromville, Georgia, about 50 miles south of Macon. Many of the cars actually tumbled off an overpass onto a highway, causing an evacuation and a traffic nightmare in the small town – but no injuries, according to the Associate Press.

Thirty cars in total derailed, including those that fell off the overpass onto Highway 90, around 7:00 a.m. Resident Stephanie Chapman told the Associated Press (AP) she was on a deer stand more than a mile outside town when the derailment occurred, but she heard the collision clearly.

Chapman also told the AP that there was an initial call for evacuation for most of the town, but the perimeter of that area was soon reduced. By midday, she said she was allowed to go to her office, which was around 300 yards from the site. Crews continued to clear up the cars and debris off Highway 90.

Although CSX reported in an emailed news release that four of the cars held petroleum liquefied gas, no leaks were reported, and officials were monitoring air quality. The statement added, “Crews are working to re-rail the cars without damage and remove the derailed railcars with damage from the area as quickly and safely as possible.”

Whether passenger or freight, a train accident can cause extensive and catastrophic injuries. If a train derails or collides with another train or vehicle on the tracks, passengers are likely to be seriously injured due to the lack of restraints and other safety equipment inside railway cars.

And it’s not only train passengers who can suffer serious or fatal injuries from rail accidents. In July 2017, our firm secured an $11.2 million verdict on behalf of the family of Sarah Jones, who was killed by a CSX train while filming on the tracks with a movie crew in Jesup, GA. A jury found CSX partially responsible for Jones’ death, with partner Jeff Harris revealing the train operator did not apply the brakes until after the collision happened and that several CSX trains had passed by the filming location without reporting that there were people on the tracks – a direct violation of CSX’s own policy.

Negligence or recklessness can occur on many levels of the railroad industry. Some common causes of train accidents include:

The Georgia train accident attorneys at Harris Lowry Manton LLP can help if you or a loved one suffered injury in a derailment or collision. We understand how to deal with train and rail companies and work to protect your right to compensation for your injuries. Call us today at 404-961-7650 at our Atlanta office, in Savannah at 912-651-9967, or fill out our contact form.